Harken Reflex Furler: Always adapting to stay ahead of the game

Blocks, winches, travellers and a whole range of other systems, Harken has been a market leader in the sailing industry for over 40 years and is a household name among sailors. They consistently deliver great quality products and are known for their extensive distribution network and customer service. However, despite their extensive product range, Harken didn’t actually release their own continuous line furling system until 2016.

When Harken joined the continuous line furler market, they wanted to bring their own innovations to the table, to create something unique compared to the competition. They came up with two key points of difference:

The first opportunity they saw was to improve torsional cable performance. A lack of Torsional stiffness can lead to “corkscrewing” in the cable which can result in partial or uneven furling and creates a lag in furling speed. To combat this, Harken developed a torsional cable that would immediately deliver torque through the cable to the head swivel. They achieved this by braiding stainless steel wire over a Dyneema® core. They certainly achieved an extremely torsionally stiff cable but, as with all things, there was a price to pay, which was increased cable weight versus alternative solutions on the market.

Having come relatively late to continuous line furlers, Harken had the advantage of observing the changing trends in the market. More established manufacturers had been through a transition from dedicated bottom-up drums and then the introduction of top-down furling. Cable sizes are very different between bottom-up and top-down which requires very different jaw widths in the furler which can cause issues with drum vs cable compatibility. Harken could also see the increasingly popular trend towards the use of top-down tack swivels.

To address this problem and create flexibility / redundancy in their design, Harken introduced furling units with a quick release fitting and a variety of attachments to allow one drum to fulfil multiple applications. So simple! 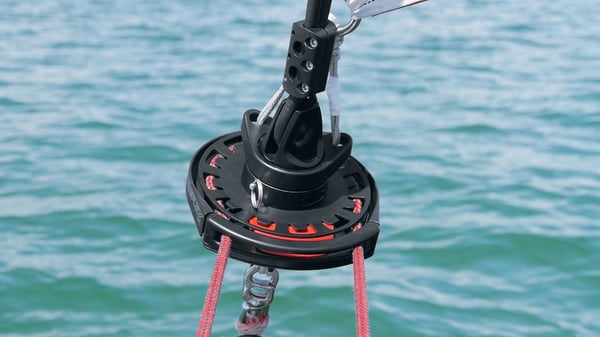 A year or so after the launch of the Reflex furler, another significant development started to emerge in Code zero furling. Big names like Doyle and North sails were working at “Cableless” sails to remove the need for a torsional cable completely.

The pro’s and con’s of cableless code zeros are beyond the scope of this blog but suffice it to say, there is an increasing trend in this direction with more and more sailmakers introducing this technology into their sail wardrobe recommendations.

Harken were quick to react.

With the Reflex’s quick release system, all that Harken had to do was create a tack plate fitting that could be sewn into the tack of the cableless sail. This fitting is permanently attached to the sail and lives, in the sail bag, when it is not in use. The furling drum is then free to be used for other sails.

Interestingly, one advantage of cableless is that it is no longer necessary to tension a stiff, torsional cable to ensure a good furl, which puts less load on the furler. This means that these furlers can be used on a wider range of boat and sail sizes than Harken had ever envisioned. 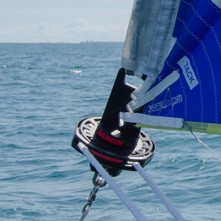 The terminal is sewn directly into each sail and allows for much easier storage and movement of the sail, without the need of Harken’s steel torsional cable.

Harken entered the furling market with some innovative, bold ideas. While the idea to use steel to reinforce the torsional cable created a weight penalty, the quick release fitting has allowed Harken to quickly increase the applicability of the furler to a wider range of boats and sailing systems.

Their ability to read the market and adapt to new innovations shows why, after 50 years, they are still world leaders.