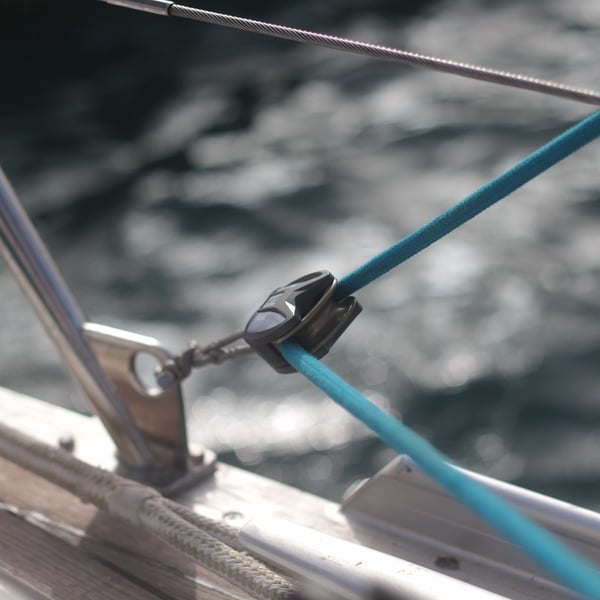 In light of the newly updated Ino-Rope product range, we ask you to cast your mind back to 2013: French duo – experienced offshore Mini Transat 650 sailor Thibault Reinhart and professional rigger Julien Barnet – burst onto the sailing scene, attempting to upturn the sailing industry with a range of high tech, soft loop blocks.

After a few years of trials and tribulations… and with a successful final test on an IMOCA 60 proving their concept, Ino-Ropes’s Ino-Block was born in 2015. Yet, in a crowded market dominated by industry giants, many people wondered - what was different about the Ino-Block?

Now, don’t get me wrong - here at upffront.com we get it. You’re expecting a spiel of marketing text, trying to persuade you that the Ino-Block is lighter (it is), stronger (it is) and safer (it is) than some of its traditional competitors. But that’s not the only difference.

Stripped of the central metal axle, bearing and sheave found in most traditional blocks, the Ino-Block is a true composite block that instead utilises an ingenious textile axle. In a potentially revolutionary step, the load bearing elements consists of a simple aluminium sheave, running directly over a Dyneema® SK99 strop.

DAME nominated, this patented textile axle technology is both cutting edgeand simple; the efficient mechanism is encased in two (non-structural) lightweight plastic cheeks, and the block is suitable for both racers and cruisers.

Many traditionalists would argue that this does not constitute a 'real block' – however, with the sheave bearing directly on the Dyneema® axle, it is, in effect, a plain bearing block which is suitable for high loads and low line speeds.

In fact, Ino-Rope claim that the greater the load the more efficient the block becomes, as the Dyneema® gets smoother. At lower loads it is less efficient, which is where ball bearing blocks will always have the advantage. So, given its weight advantage the Ino-Block looks to have a bright future in the market.

Indeed, akin to the Ino-Bock, Morf Block was launched 12 months later with a similar principle. However, the subtle difference with the Morf Block is that it utilises a physical plain bearing between the thimble and the Dyneema® loop. As a result, the manufacturer can play with the material composition of the bearing to optimize the block for high load/low speed OR low load/high speed. Read our full blog on Morf Block’s here.

A big advantage of both is their inherent safety: as the Dyneema® loop goes through the centre of the sheave, the cheeks and thimble can fail completely but the loaded line would be safely held by the Dyneema® loop, making catastrophic failure significantly less likely than with a traditional block.

The simplicity of the Ino-Block also means it is easy to inspect and maintain - corrosion resistant, it does not require lubricants, and the Dyneema® loop just needs checking occassionally. That’s it!

The new Ino-Block range has seen some minor changes since 2015. Now lighter than ever, the blocks are available in black (as opposed to the previous funky colours) and are available in various configurations such as becket, non-becket and lashing.

In addition, Ino-Rope have also introduced some new products to upffront.com, such as their new range of innovative Ino-Endings. The integrated textile connector forms part of a larger 2:1 purchase system, and ensures a seamless integration between the block and the line without the need for an additional connector.

Looking to make the move to a composite block? For our full range of Ino-Rope products click here, or alternatively for further guidance and support contact us at support@upffront.com.