LOOP Products: An Innovative Twist to the Stick-on Padeye

Padeyes are a multi-purpose attachment point, traditionally made of steel and bolted directly on to the deck. With a significant shift to soft connections over the last 5-10 years, the humble padeye has been through its own transformation and continues to evolve. In this blog we look at the evolution of the soft padeye and the latest flexible, stick-on solution from LOOP Products.

LOOP Products was among the first companies to start developing a padeye that used the benefits of Dyneema® rope to create soft deck terminations. These modern alternatives to stainless steel are lighter, stronger and much quieter than traditional padeyes.

The original design for soft padeyes involved drilling a hole in the deck large enough to fit an anodised aluminium ring that can then be screwed into another ring under the deck. A Dyneema® loop is fixed underneath, using a dogbone, and then protrudes above deck from the centre and is suitable for attaching blocks, shackles or integrating friction thimbles to provide a line lead. 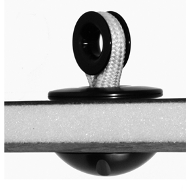 The large diameter ring at the bottom of the padeye spreads the load out evenly over a wide area of deck, to increase the working load. With a sealed cap on the underside, these padeyes are fully watertight and the Dyneema® loop can easily be replaced if they get damaged or worn. This type of soft padeye, in a number of different styles, is now available from various manufacturers and they generally have the highest working loads (from 3000-10.000kg). For example Ronstan’s Removable Lash padeye has a SWL of 7000 kg.

The drive for Minimalism

In an effort to simplify and reduce weight, Ropeye then appeared on the market with a unique concept called the Loop padeye. The major development was to integrate / bond the Dyneema® loop into a carbon (or glass) base plate. The idea is that the loop is then pushed through a small diameter hole and the carbon base plate is bonded to the underside of the deck, which makes it watertight. The base plate also spreads the load over a wide area of deck, however the safe working load of this system is limited by the bond of the Dyneema® in the carbon plate e.g. a 6mm Loop padeye has a maximum safe working load of approx. 2000kg

Because of the minimalist design of these padeyes, if any part breaks or becomes worn, the entire padeye must be replaced. However, due to its ease of use and excellent price, the Ropeye Loop padeye quickly gained in popularity compared to some of the larger padeyes on the market.

At the same time, the quality and strength of marine adhesives was also advancing at a fast pace. With the rapid acceptance of the Loop padeye, coupled with high quality, reliable adhesives, a stick-on version was an obvious next step. Relying purely on a surface bond, safe working loads of these stick-on fittings are only up to approx. 150kg and therefore mainly limited to non-structural internal fixings on yachts and some applications on small dinghies. However, there are a multitude of applications for this simple, cheap fixing which is quick/easy to use and requires no holes to be drilled. For example, hanging points for virtually anything onboard e.g. oil skins, sheets, halyards, saucepans, binoculars…. Or anchor points for pulley systems e.g. pipe cots. These fixings are so useful that race boats will buy these in bags of 20 and always have spares available for system improvements on-the-fly. 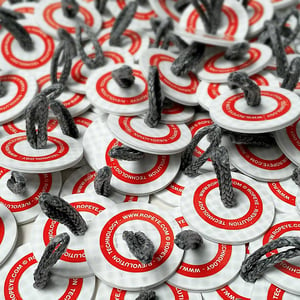 As one of the early innovators of soft solutions, LOOP Products has now jumped in with the latest evolution for the Stick-on padeye.

Boats are inherently "curvy" and a limitation of the previous stick-on designs was the requirement to have a perfectly flat surface on which to bond the carbon disk. LOOP Products have got around this by using a clever production technique to produce a flexible, ribbed carbon base which can curve around both internal and external radii to form a strong bond. 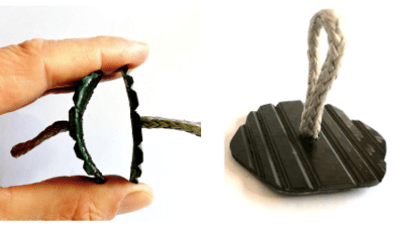 The LOOP Products Stick-on padeye is currently available in one size and uses a 4mm Dyneema® with a 40mm loop length. They have a SWL of 150kg.

Have you joined the Stick-on revolution?

If you have any questions about padeyes, deck connections or any other sailing hardware or rigging related issues, then please contact us at support@upffront.com