Upffront.com is all about performance sailing hardware and rigging systems. The heart, and driving force, of any sailing yacht is its mast and standing rigging which support the sails. If you are interested in optimising / upgrading your sailing systems it is important for us to have a common language, so we can share performance improvement ideas and options. In this blog we outline the key terminology of modern masts and rigging.

The standing rigging is the fixed / structural stays which support the mast. These are often split into Fore & aft (forestay and backstay) and then the lateral rigging (side shrouds). In wire rigging world, people often refer to the Cap shroud (running all the way from deck to masthead) and intermediate stays, however when we start talking rod and composite rigging we need to be more explicit and break the lateral rigging elements down in more detail. 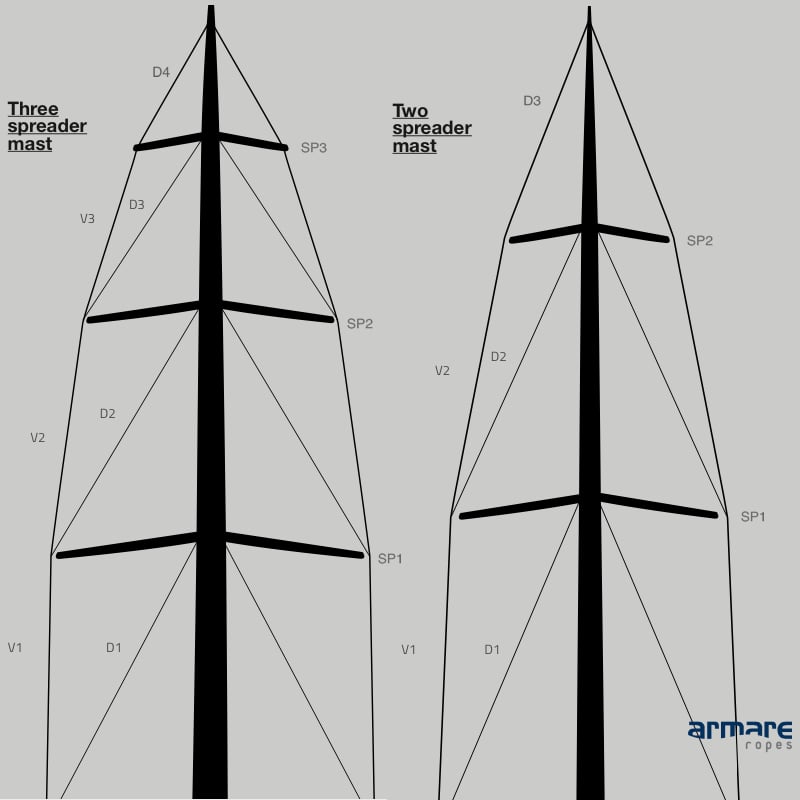 © Armare Ropes
Instead of a single cap shroud we have Vertical shrouds (Verticals), numbered as individual elements between the spreaders. The V1 connects the deck chainplate to the tip of the first spreader and the V2 runs between the first and second spreader etc.

Any stay joining the mast is called a Diagonal, and these are again numbered, relative to the mast panel e.g. D1, D2 etc. Across the top spreader there is normally a single stay with no junction i.e. it just bends around the spreader end. This single rod/wire/cable is often referred to as the "Top-span". In the lower half, it is acting as a vertical and then up to the mast it is a diagonal. On a 2-spreader rig this top-span cable is called the V2/D3 and on a 3-spreader rig V3/D4.

Standing rigging attachment points on the mast are called Tangs. There are many different types of tangs and when working on rigging projects it is critical to know what you are dealing with. For example. a forestay tang can be a single plate (Lug), which requires a fork interface, or two plates on the rig (Jaw), designed for an eye fitting. Pin hole diameters, plate thicknesses and overall geometry are all crucial measurements when working with these types of tangs.

The top Diagonal tang is called the Cap tang and the others referred to by the Diagonal number e.g. D2 tang. Again, there are many different types, but most modern yachts will use tangs designed for Stemball end fittings. These will either be fixed to the mast wall - Clamp Tang – or a lower profile, lighter weight solution uses a through-bar system and commonly called a Micro Tang.

It is critically important that you use the correct stemball for your tang. It is standard industry practice to source your stemballs from the same manufacturer as your tangs. The geometry and the radius of the stemball has to exactly match the seat in the tang, to minimize wear and metal fatigue.N.B. The stemball is mounted on the rod prior to cold heading. 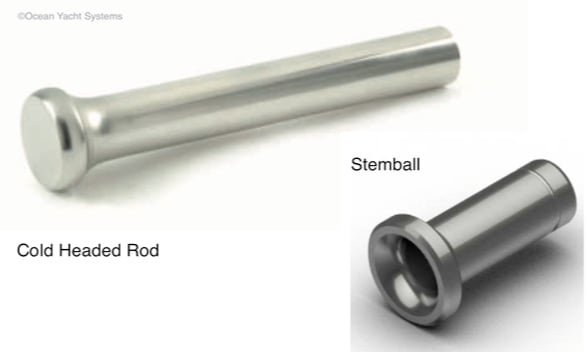 The deck attachment points for the standing rigging are called Chainplates. These are key structural elements of any sailing boat and, like the forestay tang, they will generally be either a Lug or a Jaw arrangement. Interestingly, but unsurprisingly, the pin diameters in your chainplates ultimately define most of the hardware specification on your boat. For example – one of the critical specification criteria for any headsail furling system is the forestay chainplate pin diameter.

Masts move......... and articulation is an essential element of any structural rigging joint. The reason stemballs are so popular is that they are essentially a ball joint which allows articulation. For any other mast or deck attachment a Toggle is used to allow articulation in two planes.

Increasingly popular on grand prix race boats is the use of short, soft strops to connect the standing rigging. The beauty of soft connections is that they allow for movement in any direction to perfectly align to the load angle. On some IMOCA 60’s the forestay and cap tangs will simply be two carefully radiused holes in the rig, designed to take a soft strop, either cow-hitched or spliced in situ. If you are retrofitting running backstays or additional checkstays we would encourage you to think “Lash Tang” - which creates a simple, lightweight, reliable mast attachment.

Saving weight aloft has major benefits in terms of your boats sailing performance (refer to previous blog on the subject here). There are an increasing number of new materials, technologies and products available which can be retrofitted to an older rig to turbo-charge your faithful ride.

If you have any questions or would like to discuss retrofit options for your mast or rigging, please feel free to contact us at support@upffront.com or use the link below