Guest Blog - Why and When You Need a Code Zero 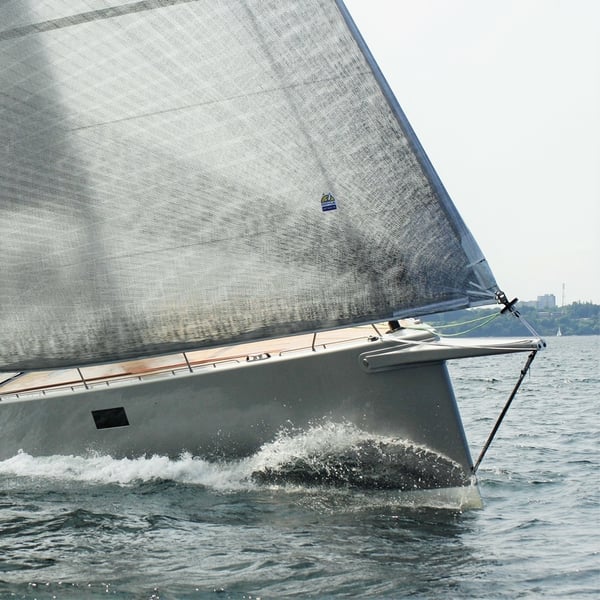 In the last blog, Bjarne Lorenzen of sailmaker Doyle O’leu talked about the exciting new performance cruiser, the 39BEN built by Bente in Germany. While the sail plan will develop over time, the code zero was one of the first sails to go into the inventory. Here, Lorenzen explains the appeal of the code zero, a sail that emerged from the offshore racing world and is now firmly established as an essential part of a modern cruising sail package.

“If you’re sailing hard on the wind, there’s little to choose in performance between a headsail with a longer foot or a short-footed jib designed for self-tacking and ease of handling,” says Lorenzen. “However as soon as you ease sheets, the longer foot brings much more performance. That’s where the code zero comes in as an incredibly useful sail. If you only have a short-footed jib, or if you can’t hoist a genoa because of the position of the shrouds, then you have a real gap between true wind 55 to 110 degrees.

“For lots of customers, cruising sailors included, they are really happy with the code zero; it’s effectively a turbo for the boat, is easily furled, and easy to hoist and drop. It’s a powerful sail, and on our cruising holiday last summer we used the code zero nearly all the time. You can pretty much use it at any angle, upwind or downwind.

“It’s great for adding extra sail area downwind in a breeze, providing a lot more sail area than only mainsail and a small jib, but without the hassle or the handling challenge of flying an asymmetric spinnaker for example. Unfurling a code zero is so much simpler and much less of a headache.”

Lorenzen says the shaping for a cruising code zero is designed in such a way to make it possible to sail just 10 or 15 degrees lower than a boat’s upwind heading in light winds. “Cruising sailors are happy to have a large sail to keep the boat moving rather than having to start the engine and driving with that boring background noise until the next harbour.”

For most cruising customers, Lorenzen advises a straightforward and very affordable polyester laminate. “Normally we use Dimension Polyant, because you get a lot of sail for your money. For anything up to a 38ft cruiser, this option is fine. However, if you go larger or you want to go transatlantic or do some long-distance cruises, then it makes sense to get a cloth with some aramid fibres, such as Kevlar or Technora Black. This gives you the extra strength and confidence that if a sudden gust strikes, or if you furl the sail too late, the aramid fibres will help cope with the extra overloading of the sail.”

Fitting a code zero to a boat with a fractional rig is fairly simple. However, the key is to have some separation between the main forestay and the furling code zero. “Sometimes the spinnaker halyard exit is directly above the headstay exit, but often you can solve this by putting a fairlead 30 to 40 cm above it, or by putting another sheave in the mast.”

Retrofitting a masthead rig, though, it is rather more challenging to get the separation between the headstay and the code zero. Sailing is not the problem, it’s the furling that’s the issue. At deck level it’s easier because a bowsprit creates the separation in the lower section of the rig. There are plenty of bowsprits available on the market which are pretty easy to retrofit. It’s up at the top where the problems tend to occur because of the stiffness of the head patch in the code zero. The upper 20 to 30cm on the head are quite solid and not very flexible, so you need good separation to get the sail to furl smoothly without snagging.

“Sometimes the solution is a matter of shortening the luff of the headsail, but for some boats the only solution is to fit a forward masthead crane. This is not a straightforward task, and it’s easy to underestimate the loads. An under-engineered piece of alloy won’t do, because the loads from a tight-luffed code zero are much higher than an asymmetric gennaker, particularly when you’re sailing tight angles. So, don’t go cheap on this job. Do your research, find the right company to do the work and be prepared to pay a bit extra for a proper solution.”

If you’re in doubt about the benefits of a code zero, ask some other sailors how they’re finding it. Once you’ve got used to the versatility and power of the code zero, it’s hard to go without it!

If you have any questions about code zero and asymmetric furlers, please feel free to email us at support@upffront.com, or click the link below to see our full range: