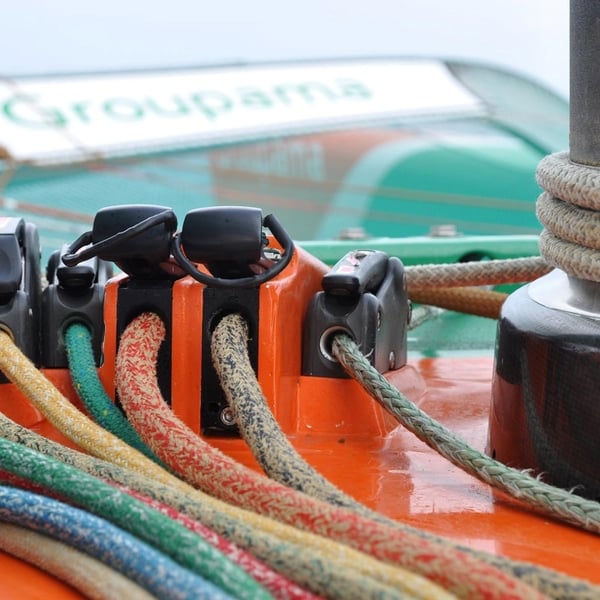 There are many core materials used in rope making (e.g. Vectran®, PBO, polypropylene, hemp, nylon etc) but the vast majority of modern ropes are based on a polyester, or increasingly, a Dyneema® core. Get a basic introduction to the benefits and weaknesses of these two primary core fibres.

Polyester is widely used because it combines strength, low stretch, abrasion resistance, durability and moderate price. Polyester fibres are very fine (approx. 0.02 mm diameter) with a specific gravity of 1.38 which means the rope does not float.

Unlike nylon or polypropylene, polyester is relatively stiff and any stretch in the fibre is normally minimized by a heat setting process during manufacture resulting in very little creep under load. It also holds its strength when wet, unlike nylon. Polyester has a melting point of approx. 240 oC and has excellent UV and abrasion resistance; it is also non-conductive.

Dyneema® is a brand name of the manufacturer DSM, for an Ultra-High-Molecular-Weight-PolyEthylene (UHMWPE). It has very long molecule chains which are extremely strong, particularly after being aligned by stretching. The molecules are streamlined, which prevents chemical interaction and accounts for its water repellent properties, its slippery feel and resistance to chemicals.

Dyneema® has a specific gravity of approx. 0.95. Therefore it floats and its strength is not affected by water. Its melting point is around 145 – 152˚C which is quite low compared to other ropes and excessive heat has a noticeable impact on the longevity of the ropes properties. Its other weakness has traditionally been creep under constant load but manufacturers are making significant gains in this regard with each new generation of the fibre.

UHMWPE has a very low coefficient of friction and is as “slippery” as Teflon. It is also self-lubricating which means it has low levels of inter-fibre friction and therefore fibre fatigue is very low. It works extremely well around corners (unlike some of the aramids and PBO) and has excellent UV resistance.

The introduction of SK75 in 1996 led to the widespread acceptance of Dyneema® in the sailing industry. However, its use has all but dried up and been replaced by SK78 (2003) which has the same strength but 3 times lower creep, longer life and better fatigue resistance than SK75.

Source Gottifredi Maffioli: Comparison of creep properties between Dyneema SK75 and SK78 at 25˚C and an average static load equal to 25% of break strength.

SK90 was introduced in 2009 and whilst it offered a strength improvement over SK75/78 of approx. 10-15% it had the same creep characteristics as SK75(!) and it’s no longer in widespread use.

DM20 (2012) was developed specifically for long term mooring of fixed installations e.g. oil platforms. The creep performance of the fibre was improved dramatically, in fact, DM20 exhibits virtually no creep (0.5% over 25 years).

Unfortunately, the compromise was that both strength and stiffness were lower than SK78 and this limited its applicability for leisure marine applications. In theory, zero creep would make it ideal for standing rigging stays but low strength and stiffness mean that there is a significant diameter penalty over other materials (wire, rod, PBO or carbon) to achieve the same stiffness. For halyards and sheets, long term creep is not actually much of a problem and therefore it does not bring any real advantages to running rigging.

SK99 hit the market in 2013 and is the latest offering from DSM Dyneema®. SK99 is 20% stronger and 40% stiffer than SK78 but retains the same creep characteristics.

So, after 20 years of development and progression, SK78 has become the marine industry standard for yacht ropes, with SK99 carving out a well-earned reputation as the ultimate performance core material available.

Why are all the different types of Dyneema® labelled “SK”!?

Answer: The SK refers to the two main inventors of modern Dyneema® fibre: Paul Smith and Rob Kirschbaum who both worked for DSM Dyneema in Holland (http://www.thedyneemaproject.com/story-of-dyneema/dyneema.html).

DSK is also commonly used and the "D" stands for Dyneema®. DM20 on the other hand was a fundamentally different development by DSM and they branded it Dyneema® Max (DM)20.

If you have any questions about ropes, please feel free to email us at support@upffront.com, or click the link below to see our full range: