In a previous article we looked at the benefits of having live forestay load data using the Cyclops Marine Smarttune load sensor. In this blog we take a closer look at the sister product, often used in combination with the Smarttune, called the Smartlink. This is a flexible, multipurpose load sensor designed to be lashed into any system, to provide live loads.

The Cyclops Marine Smartlink was developed over the winter of 2019/2020 in collaboration with America’s Cup INEOS Team UK. Their requirement was for the smallest, lightest possible wireless load cell, and the result is the Smartlink.

Made from Titanium and incorporating a traditional electrical strain gauge, the Smartlink has onboard processing capability, which converts the electrical signal to a calibrated, digital load reading which is then transmitted over Bluetooth at one reading per second (1Hz). The load can be read directly on a handheld device, using the free IOS/Android App, or integrated directly with existing onboard displays using the NMEA2000 Gateway.

As the name suggests it is designed to be incorporated as a link in virtually any system, using simple lashings. This makes it a very versatile tool which can be used in many applications. It should be noted that the only limiter / constraint is the vertical distance it takes up within an existing system, for the load cell plus lashings at either end. Having said that, most running rigging systems inherently provide enough space, at some point, for this compact device (the 2T Smartlink is 79mm long).

The Smartlink is factory calibrated so after a simple installation, you have immediate, quality load data, straight out of the box. Here are some of the most common use cases:
• Bobstay tension – measuring bobstay load gives you a good idea of luff tension in your code zero. Aiming at target luff loads in different conditions will ensure you maintain optimum sail shape
• Tack loads – alternatively, many headsail tacks incorporate purchase systems to manage luff tension. Add in a smartlink to get to the right luff tension every time
• Vang loads – On modern performance boats, vang load is critical element to rig and mainsail efficiency. Find your upwind or power-reaching groove, quickly with confidence.
• Mainsheet loads – similar to above but with the proliferation of performance cruising catamarans, managing your mainsheet load limits is never more important to the safety and wellbeing of everyone onboard!
• Backstays – whether it is on a single fixed backstay or runners, adding a Smartlink allows you to get to pre-determined optimum settings quickly after every tack, or as conditions change. 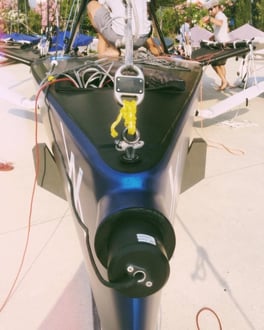 There are 5 key benefits to gathering rig load data

• Live / dynamic sailing loads – when you are out sailing, setting up the mast, sails and other systems to known, optimum loads in varying conditions allows you to sail your best race every time.

• Post-race analysis of your course, speed, wind strength together with load data provides the opportunity for in-depth understanding of what makes your boat tick and forms a platform for structured, continuous improvement. There are various sailing data analysis tools available to help you manage and get the most out of your data e.g. from Sailjnord or KND Sailing Performance

• Hardware specification – one close to our heart at upffront – an accurate understanding of real dynamic loads enables owners to optimise their deck hardware and rigging choices. Every piece of hardware needs to be strong enough to carry the load, whilst being as light as possible. With accurate the load data you can make hardware decisions with confidence.

• Safety and Maintenance schedules (tied to your hardware specification). Most items of hardware and rigging fatigue and require periodic replacement. A product’s life expectancy is generally a function of load: the higher the load the lower the life expectancy. Manufacturers define life expectancy and replacement schedules based on an assumption of an average SWL. If your actual loads are lower than the manufacturers assumptions your parts may last longer, however, if you're pushing the performance envelope and average loads are higher than the stated SWL, then you should consider shortening your replacement cycle.

The Smartlink range comes in three sizes 2T, 5T and 10T safe working load, with a new 20T version soon to be released.

The Smartlink incorporates a smartpower feature which helps extend battery life by reducing the risk of leaving the unit on. Press once to power on for 30 seconds, twice for 20 mins, three times for 2 hours, 4 times for 8 hours and 5 times for continuous power. With proper power management a single battery should be good for 25-30 days of racing, however with just 1xCR2032 coin cell battery, it is very quick and simple to replace.

Once you get started you won’t be able to stop! Many Cyclops customers are running multiple units with a mix of the Smarttune for standing rigging loads and Smartlink for various other applications. At upffront.com we passionately believe that readily available rig load data will drive the next step-change in hardware and rigging development and sailing performance improvement. But the benefits go way beyond performance, to proper hardware specification and maintenance which creates a win-win.

If you have any questions about the Smarttune / Smartlink products or rig loads and hardware specification, please do not hesitate to contact us at support@upffront.com