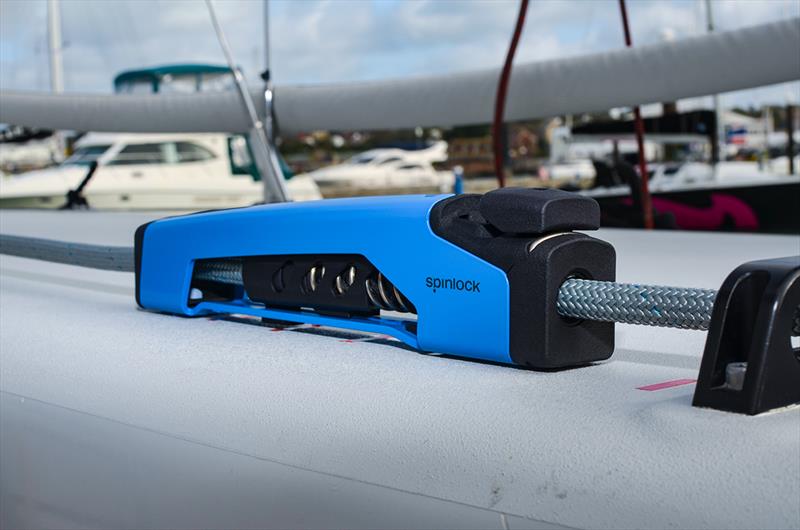 Widely known as experts in rope holding, Spinlock is the go-to solution for many sailors when it comes to clutches and jammers.

We’ve been looking forward to the launch of their new product, the XTX Clutch ever since we got our first look at this sleek and modern design at METS 2019.

Aesthetically, the XTX certainly doesn’t disappoint. Spinlock have taken all of what works from similar products, such as the Cousin Constrictor, and built on that foundation both in design and functionality to create a product that looks great, works well and is easy to use.

Much like the Constrictor, the XTX uses pressure from a fibre sleeve to hold the rope, which is much less abrasive and reduces the damage to lines drastically when compared to metal or ceramic clutch cams. More pressure means more friction and the XTX actually grips better the higher the load. The sleeve also distributes the load across a longer section of rope to reduce wear. The Spinlock clutch is 264mm, compared to the Cousin Constrictor which is 300mm, which would mean that the Constrictor is able to spread the load across a wider area and therefore can hold higher loads. On the other hand, the large spring used in the XTX stretches the braided sock over the line to allow the jammer, as soon as the clutch is engaged, to take the load immediately. In comparison, the Cousin needs around 5 – 10 mm of loaded line movement to stretch the sock before it is able to take the full load.

All clutch adjustment is handled with one pull toggle and a button, located at the back of the jammer. When the button is down, the rope will move freely in one direction, but lock if the direction changes. Pulling the toggle slightly allows for short, controlled bursts of rope to be released. You can let the rope run freely in either direction by pulling the toggle out until the button releases, and then lock it again by pressing the button.

The clutch is easy to maintain without removing it from the deck. Taking off the rear cover allows the whole braid mechanism to be removed in one piece. You can then inspect it, clean it and make sure everything is in order before re-assembling. The whole process takes less than 30 seconds.

Chances are that you currently have some Spinlock clutches already installed on your boat, in which case, it’s good news. The Spinlock XTX is exactly the same width as the XAS, XTS or XCS which means they can easily be slotted into an existing bank of clutches.

Summary
The XTX is a real step forward in this mid-load Spinlock clutch range. Lighter, stronger, kinder to your halyards, quick to change-out and easy to maintain – it’s a strong proposition. The only potential downside is the increased length of the unit (approx. 70% longer than an XTS) which means it might not be possible to install where coach roof space is limited.

The Spinlock XTX is available in a range of colours including black, blue, orange, white and yellow.

If you have any questions about the Spinlock XTX or rope-holding solutions in general, then please contact us at support@upffront.com.