Morf Block: Evolution in the DNA

Morf Block – the brainchild of Morfrac Systems – is constantly evolving. Once a DIY block, where the user was free to use the lash thimble of their choice, Morf Block is now available ready-to-run, optimised for either high performance or high load.

In conversation with Nicolas Goldenberg, the founder of Morfrac Systems, this blog post reflects on the evolution of the block over time and considers the future of the product.

'The original aim was to create an all-purpose block – a standard product that was light and could withstand high loads, whilst avoiding complex deck setups,’ Nicolas says. The premise was simple: customers could attach any lash thimble to the Morf Block parts (the cheeks, plain bearing and Dyneema® attachment) and make a block.

However, despite the success of the DIY concept, Nicolas found having limited control over the lash thimble allowed for too many uncontrollable variables – such as geometry, weight and friction – which could have a damaging effect on performance.

To address this, Morfrac Systems developed their own sheaves and introduced high performance anodising finishes, partnering up with precision machining firm GL for production. 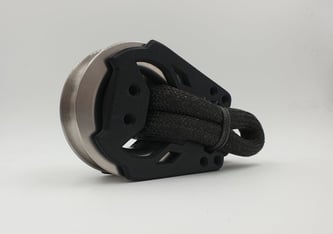 ‘In light of the positive feedback we received from our customers on this improved version of our blocks, we released the XL range. The sheaves are larger in diameter, CNC machined and made from aluminium or titanium. Our XL blocks go up to 15 tonnes SWL,’ Nicolas says.

Morfrac Systems also experimented with different 3D printing materials. As a result, high load and high-performance bearings were developed; these bearings utilise the same design, but differing materials allow the bearing to perform optimally for their application.

The high load bearing is ideal for static or semi-static lines, such as halyards, which don’t require much tuning. The high-performance bearing is suitable for speed and movement, such as a trim line or spinnaker sheet. If you want to learn more, we’ve previously written a blog post on this.

The latest development introduced to the Morf Block is the ‘Soft Grip’ technology. Morfrac System’s R&D team focused its efforts towards increasing the rope traction on the Nituff® anodised sheaves when using small diameter ropes and high-tech covers, such as Dyneema® and PBO. The ‘Soft Grip’ - a series of dimples on the sheave that resemble a golf ball - delivers a reliable grip whilst being kind on the ropes.

Incremental upgrades such as this are largely possible due to Morfrac Systems 3D printing production methods, which allow for constant incremental improvements on design and materials, allowing innovations to be introduced easily at minor cost.

To ensure optimal performance, minimal wear and reduced weight, the Morf Block is fixed through a textile lashing, allowing it to self-align and twist, and reducing the risk of malfunction and deterioration on the bearing. ‘Installation guides are distributed together with our blocks and soon will be available online for all our customers in the form of video-tutorials,’ Nicolas says.

The Morf Block has been endorsed by many top actors in the sailing world: TP52’s, such as Alegre, have fitted the Morf Block on interior systems. Class 40’s – including Veedol, the winner of the last the Route de Rhum – are fans of the XL blocks. Mini’s, Open 60’s and racing boats all use the block with great success.